Home Blog Bald Matters Before And After Bald: Time To Stop The Bald Suffering Now
46shares

Today we have another quick before and after bald story to keep inspiring guys experiencing hair loss and to hopefully get you all to fully embrace your baldness!

With over two-thirds of men suffering hair loss by the time they reach 35 years of age, we quickly realized that we were not the only one’s who had been suffering from hair loss and that there are many men in the same position as us.

I always look for signs in life, and with hair loss the sign comes when you start losing your hair. This basically means that you were just not mean’t to have a head of hair – so just shave it off, right?!

Jason’s story, on the other hand, is a bit different.

He had his hand dealt to him because of an unexpected surgery that he needed to have at a very young very age in life.

He had no choice but to shave off his hair due to his illness and surgery.

Before And After Bald: Meet Jason Arcand

The majority of men suffer from hair loss genetically, but Jason had brain surgery early on in his life and decided to keep his shaved his look after his surgery was finished.

He has opted against trying to grow it back!

He practices Yoga on a weekly basis and is a Bollywood fitness instructor.

Read the full interview with Jason Arcand below.

How would you describe your bald journey?

My journey began a bit different than your average man.

I had brain surgery at the age of 25 and shaved my head completely, I then decided to keep the bald look.

How many times per week do you shave your head and how long does it take you to get the job done?

I shave every second day and it usually takes me around 5 minutes.

Do you use a cartridge or safety razor and do you use shaving gel, foam or butter?

I use a cartridge and shaving gel.

What would your advice be to anyone that is struggling with the emotional journey of hair loss and balding and is hesitant to pull the trigger?

For men that are struggling, it’s a proven fact that men are better & younger looking with a shaved head (and facial hair).

No need to suffer, be willing to confront reality and embrace the baldness.

Hypothetically speaking, if your hair could grow back to being of substantial length to what it was in your earlier years, would you grow it back or would you stick with the bald head look?

Since I’ve been bald for over 20 years, it would be interesting to see that full head of hair again and then decide from that point, if I want to keep it.

Would make a huge difference in appearance.

Do you think bald is a good look? And why?

Bald is beautiful – it is a popular line and self-explanatory.

Studies have found that bald men are often seen as more successful and dominant then those with lush locks.

I would really like to thank Jason for sharing his story with us.

Its really a unique story in the sense that he neither did by choice because he was he wanted a shaved head look or suffered from hair loss..

Jason has truly embraced being bald for over 20 years now – the bald look suits him, just like it suits many others!

If you are currently showing any signs of baldness and feel like pulling the trigger and shaving it all off, then check out this article.

Hopefully it will inspire you to be like so many other guys and embrace your new look 100%! 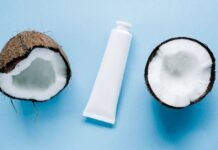 How To Own Your Bald Look: 5 Bald Men Essentials You Need To Have 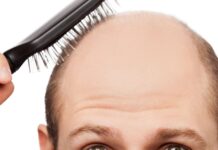 How To Overcome Hair Loss: 5 Simple Steps You Must Implement 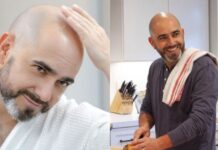 Bald Before & After: MANTL CEO On His Balding Journey

ABOUT US
Two bald brothers, helping other bald men live the best lives possible.
FOLLOW US
© All Rights Reserved | The Bald Brothers
46shares